THE BEST JUST GOT BETTER! ALL CYBER CLOAKS AND DREAM CLOAKS ARE NOW AVAILABLE WITH COSMIC FUR & BLACK SHERPA⚡️

The inside of our Dream Cloak is crafted with your choice of either Ultra-Soft Plush Sherpa or our Cosmic Faux Fur. The outside is crafted with Micro-Mink Polyester that allows us to print high definition art with intense vivid colors. Dream Cloaks feature two deep side pockets to hold all your stuff securely and Button Closures on the front. Our Dream Cloaks are completely made by hand in our Electro Factory in Utah.

This item is Made to Order. It is hand-cut and sewn in the USA, specifically for each order. The crafting process begins the moment your order is placed. The crafting period for this item is typically 1 to 10 weeks depending on surges in demand. We Love you! Thank you!..

It's soft and warm and exactly what I wanted! I custom ordered mine and it took exactly how long they'd expected, I've already recommended it to my friends! Excellent quality overall and the cosmic fur is delightful! 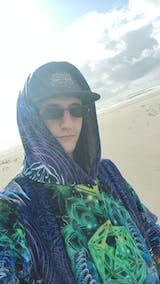 I absolutely am obsessed with the two cloaks that I ordered. The quality is amazing and the customer service was awesome! I ordered a large and realized I needed a medium and I contacted them and they changed it for me. 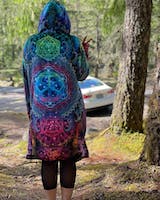 This dream cloak is literally the most MAGICAL piece of clothing I have ever seen or owned! The detail and colour is super vivid and just beyond incredible! I almost looks like it’s moving! I can’t even begin to express my delight, lol. I can’t stop looking at it and touching it! It’s also very comfortable on bare skin! Totally worth the price and the wait, IMO! It’s also pretty warm, I’ve worn it in -20 C with a thick hoodie underneath. I love colourful clothes and patterns and I have NEVER seen anything with this quality and detail. I don’t know about durability but only time will tell. I communicated with the staff Ryan and Sarah (via email) and few times and they were very helpful, caring, and super quick to respond!

HOWEVER: Just be aware of the following before you place an order so that you are prepared/don’t get too frustrated: I waited a total of 3 months to get this! It was very late (much later than I was told initially). It was *only* a major issue for me because I’m very transient but fortunately it arrived 3 days before I was supposed to leave somewhere, lol. But if you are going to be in the same place for 3 months or more it’s so worth it to wait! Also, I am in Canada, and shipping got complicated, because me nor the Electrothreads staff knew exactly who had my package (after it said there was a delivery attempt) and I spent literally hours finding it (as there are a lot of post offices near me!). Make sure that you use the “alternate tracking number” provided by UPS (only after it clears customs) and enter it into the Canada Post website, then you’ll know which post office has it! I just didn’t know. Also, I had to pay an unexpected $40 fee (duties/import fees) when picking up my delivery, because CBSA opened & inspected the package. The label filled by Electrothreads declared the item value as $10 and as “a gift”, but when it was opened, the CBSA saw the packing slip with the original price (and it was actually bought at a sale price) and charge duty based on the original value. :( 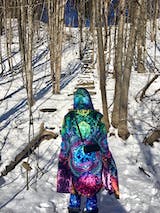 I have had this cloak for a year now and it is one of the best investments I have ever made. It has held up extremely well! I get tons of compliments on it and it's so warm! It even kept me super warm on a snowy day in Flagstaff, AZ. I got the Sherpa liner and the attached bag. The bag is totally worth it (especially at music festivals) and the Sherpa is sooo soft! The only thing is, you have to wash it and then hang it to dry or get it dry cleaned if you prefer that but DO NOT put it in the dryer if you want the Sherpa to keep its softness. I bought a blanket with Sherpa from this website and I made the mistake of drying it in the dryer, and it lost its softness. The colors never lost their vibrancy though so that's pretty amazing! Electro Threads never ceases to amaze me with their products and customer service! <3 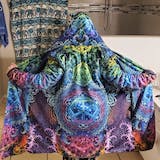 A
Alison A.
Extremely pleased

The cloak is beautiful and vibrant and extremely soft inside and out. 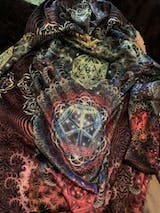